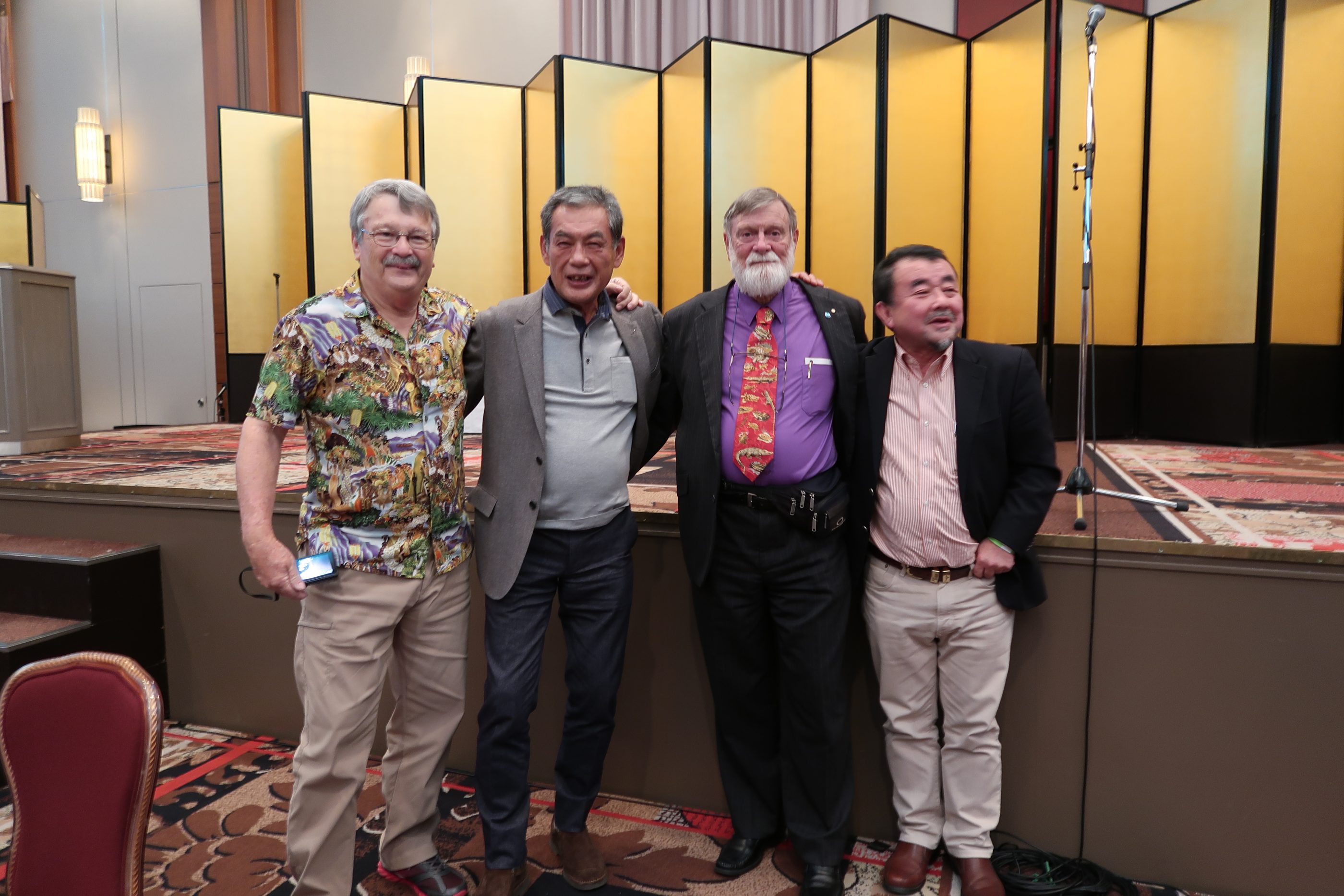 During the 38th Annual Symposium on Sea Turtle Biology and Conversation in Kobe, I had the honor of being awarded the Lifetime Achievement Award. This award was established in 2009 in honor of the world authority on sea turtles and was initially called the Archie Carr Award. To date, a little over 20 people have received this. The moment my name was announced to receive this award, the words that naturally came out of my mouth was “Why me?” Those that have received the award in the past were all renowned sea turtle researchers. They are those that have written many papers and have shed light on the understanding sea turtle ecology. As time has progressed, I have been able to feel that people around the world have started to recognize the various field studies and conservation activities that ELNA has been carrying out.

ELNA’s principle is “avoid the extinction of sea turtles that belong in the area that ELNA is involved with.” It other words “we leave it in the hands of the sea (the force of nature).” ELNA’s activity involves the elimination of direct and indirect anthropogenic causes in the sea turtle breeding grounds. We put priority in protecting the coastal environment where the sea turtles breed. These are some examples:
– Protect the nesting beaches by keeping the coast free of man-made objects
– Setting up electric fences in Papua to avoid feral pigs that people introduced from entering the beaches and eating the eggs
– Consider the effects of human activities as a factor of loss in resources and aim to mitigate the effects. Hire locals that used to collect the turtle eggs for a living as wardens so that they will have a stable life and cease egg poaching activities
– Promote the direction of increasing sea turtle populations by taking into consideration the mindset of those involved with sea turtles (sea turtle fishing and fishery practices that result in bycatch of sea turtles) consequently decreasing its impact on sea turtle resources

At this time of receiving this award, I would like to express my deepest gratitude below, adding to what I was not fully able to mention at the venue.

“For over 40 years, I have continuously been walking various nesting beaches. There are many discoveries when I am on the beach. This was taught to me by Dr. Colin Limpus from Australia, Dr. Karen Bjorndal and Dr. Jeanne Mortimer from the University of Florida, and the late Dr. Nicholas Mrosovsky who determined the sex of the temperature-dependent sex determination slide. Additionally, I had the privilege to interact with and learn from many experienced specialists such as Mr. George Balazs from Hawaii who is extremely knowledgeable about the field, Dr. Blair Witherington and Dr. Anne Meylan from Florida, Dr. Jeffrey Miller, an expert on sea turtle developmental stages and Dr. Brian Bowen, a specialist on genetics. They were the ones who guided me and pointed me to the right direction. I would especially like to commend Mr. Yoji Kurata who welcomed me to Ogasawara despite my sudden and unexpected visit there. A special mention also goes to Dr. Naoki Kamezaki, with whom I initiated the Sea Turtle Association of Japan and the “Umigame Newsletter” (the Newsletter of the Sea Turtle Association of Japan) and Shinichi Tanaka, Chief Administrator of ELNA with whom I initiated ELNA and have been working with ever since.

I would like to express my sincere appreciation and thanks to many wonderful individuals such as those aforementioned; they have guided me to develop ELNA’s unique principles and activities into what they are today. I believe these results have led to receiving the award. I am deeply grateful for this honor.”